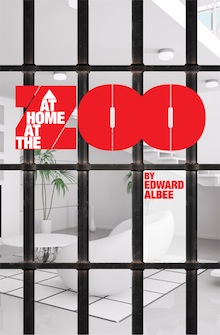 “At Home in the Zoo”

A play fifty years in the making, American master Edward Albee has penned a prequel to his brilliant one act play, The Zoo Story. This full play is a meticulously calibrated and brutal look at the trapped lives of three human animals each in their own zoo. Act I opens with Peter and his wife, Ann, whose frank conversation (which begins with "We should talk.") veers off into dangerously personal territory. It's the kind of talk that can drive a husband out for a walk—to Central Park, for Act II, where Jerry, a desperate and lonely outcast, awaits Peter. At Home at the Zoo bares its teeth to threaten our delicately balanced world, growling at each passerby through the bars. (This play contains mature language and themes.)