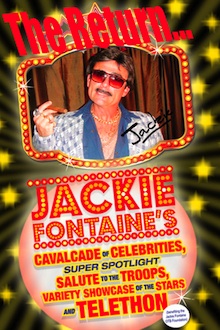 Premiered May 2011
Presented by iTheatre Collaborative

Back by popular demand (and a minor grand jury indictment) iTheatre is pleased to announce the return of Jackie Fontaine. Be a part of the live studio audience as Mr. Nightlife himself, the Prince of Comedy, Vegas' Original Troubadour, and his celebrity friends will leave you and the TV audience begging for more as they beg you for more for his OTB Foundation. Variety Showcase is an understatement, as Jackie leads this Cavalcade of Celebrities right up your aisle and into your hearts. (Due to this unique opportunity to bring back Jackie Fontaine, iTheatre is moving their originally planned production "Free Beer! Or now do we have your attention" to the 2011/2012 Season.)