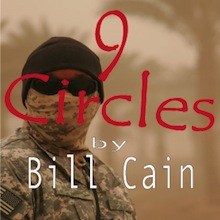 A psychological thriller based on actual events. “9 Circles” by Bill Cain tells the story of a young American soldier on trial for his life. Daniel Reeves is arrested for a crime allegedly committed in Iraq. Desperate to remain a soldier, he is forced to navigate a labyrinth of commanding officers, public defenders, lawyers, preachers and military psychiatrists. In language by turns shocking, mesmerizing and bitingly funny, “9 Circles” speaks directly to a nation still at war, asking penetrating questions about the nature and consequence of all war and what it means to be human.